The work below is in chronological order and is summarized in my CV.

The majority of my Ph.D. was funded through the DARPA M3 project.  Our proposal was on using tactile sensing and a torque controlled robot arm to increase efficiency of robot manipulation in clutter. This was in collaboration with Meka Robotics.  Papers on this work can be found at the HRL publications website and my dissertation will be available shortly. Our journal in IJRR is freely available on their website, and we are in the processing of submitting another journal where we have increased the speed of reaching in clutter up to twice as fast. We presented part of this most recent work at the IEEE-RAS International Conference on Humanoid Robots in Atlanta where it was nominated for a best paper award.  Below are some youtube videos that show our original work using a quasi-static model presented in the IJRR paper.  Video where we have increased the speed while still controlling forces for reaching in clutter will be released shortly.
You can also access other videos related to this research here.

In July 2011, my adviser was kind enough to send me to Germany to hear speakers such as Neville Hogan and others explain different aspects of impedance and impedance control in humans and robots.  See list of talks and slides here.

I built a system to run autonomous testing of different grasp controllers and also record data from the grasping trials to use for machine learning.  This work was featured in IEEE Spectrum and Popular Science blogs.  Future work on this project will include active learning during the data capture. Designs and code for the system can be found here (thanks to Joel Mathew for the CAD models).  Below is a video of our most recent progress where the robot ran for 5 nights straight attempting over 4,000 grasps in that time (I don't expect anyone to watch the 30 minutes of time lapse video, but it is interesting to skip forward a bit and see the sun come up for the poor guy).

Multi-purpose Hardware Mount for the Kinect

I designed a new mount to attach the Kinect 3D sensor on many of our robots.  I also documented this process and posted Solid Works files for people to print or manufacture the parts for themselves.  The documentation can be found at http://www.hsi.gatech.edu/hrl-wiki/index.php/Kinect_Sensor_Mount. Below are two examples of the mount shown on Cody and our PR2.

I worked for a few months on a government subcontract to show proof of concept for semi-autonomous casualty extraction using an autonomous mobile manipulator.  Below are some pictures that relate to the work I did.  I was responsible for researching which 3D sensor to select and implementing  the sensor in hardware as well as writing the perception software.  We were able to use our previously written open source code that was originally for the playpen project.  I also designed the end-effector for the task and supported Visual Odometry and Mecanum control code that I had previously written.  Click on each image below to get more detail in the caption. 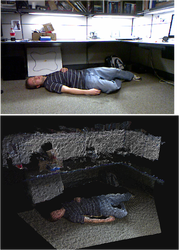 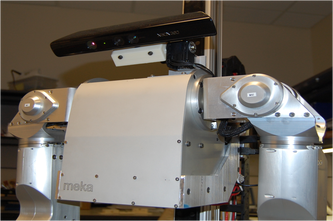 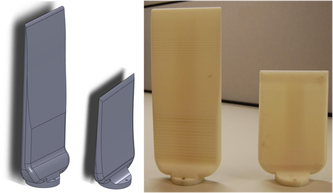 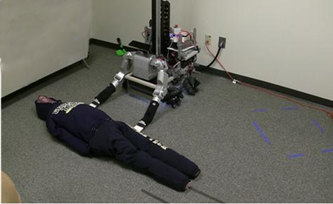 I was accepted in the summer of 2010 to attend the Telerobotics Summer School in Munich Germany.  In addition to great talks and tutorials on many aspects of telerobotics (including control paradigms, force feedback, visual feedback, etc.), we were able to visit labs at DLR and TUM.  Click here to see some videos.

Teleoperation and Force Feedback for the PR2

I worked with another student to port our teleoperation code from Cody to the PR2.  This resulted in open source code for interfacing with the Phantom Omni through ROS (see here).  In addition to general teleoperation, I added a simple position-position force feedback architecture.  Although the estimated force at the end effector is based on the commanded torques, those torques are basically a function of error in commanded position.  For this I am specifically referencing the kinematic Jacobian transpose controller that we are using for this project.  The result is not extremely impressive in terms of perfect force reflection, but it was nonetheless useful in basic tasks as shown below.

Visual Odometry and LQR Control for a Mecanum Base

I designed a mount for a downward facing camera and implemented visual odometry on a Segway RMP 50 omnidirectional base with mecanum wheels. Using this system I was able to develop a LQR controller to command smooth motions for the base. This increases the kinematic workspace of Cody, the Healthcare Robotics Lab's two-armed robot, which we have found to be very useful.  See video below.

PR2 in the CNN Newsroom

I became an expert in robot logistics when we had to move our 400 lb PR2 to the CNN Newsroom in downtown Atlanta for a live demonstration.  Below is the video of my lab mate and adviser.  Get more information about the demo and see more pictures of us with the robot at CNN here.

EL-E was the Healthcare Robotics Lab's first mobile manipulator.  Since entering the lab I've been involved in two of the revisions as we changed code and hardware infrastructure, essentially rebuilding her from the ground up.  I was responsible for hardware during the project and ended up redesigning the entire mobile base and mounting mechanism for the motors.  I also afterwards cleaned up the Katana robot arm code to allow for updating joint trajectories on the fly which was previously impossible.  Finally, I implemented a simple keyboard interface to show proof of concept teleoperation for an assistive robot in a home environment.  See the image gallery and videos below. 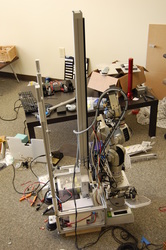 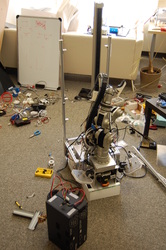 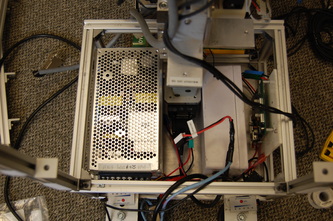 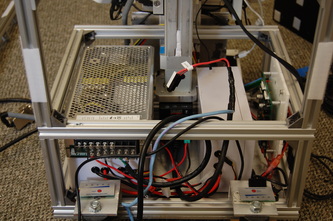 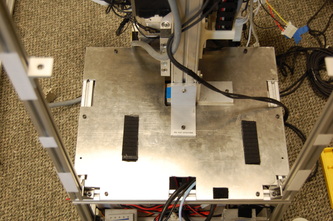 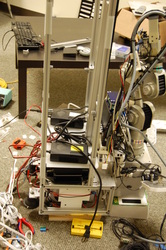 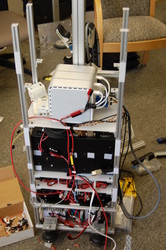 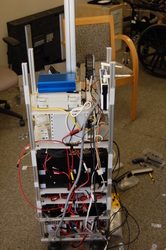 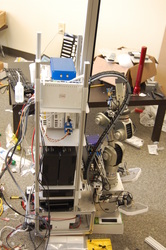 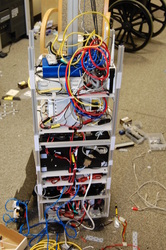 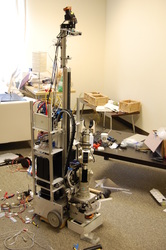 Teleoperation for a Hygiene Task

I worked with our post-doc (Dr. Aaron King), in the lab to develop a teleoperation system with haptic feedback.  Teleoperation is something we wanted for Cody anyway, but the motivation for this work was two fold:
For this work I was focused on the kinematics and controls.  I also did the machine vision analysis of whether or not the task was successful, designed and prototyped the end-effector and helped to run the experiments.  See project page for more information.

One of my first projects after being accepted into the Robotics Ph.D. program at Georgia Tech involved large scale tracking and modeling of cloth for an automated sewing system.  Work related to small scale positioning of the cloth can be found here.  My responsibility was in regards to using a single camera to track and control the cloth motion while doing gross positioning before and during sewing operations.  I used the Pyramidal Lucas Kanade feature tracker in OpenCV combined with an Extended Kalman Filter formulation to track the non-rigid and deformable cloth.  See poster below for some details, (video will be added later).

I worked for nine months doing research in  French Laboratory on Finite Element Analysis for modeling of unstable buckling phenomenon.  This had particular application to modeling metal forming operations in the manufacturing and technology masters degree that I was pursuing from ENSAM (a French Grand Ecole).  I ended up learning a lot about FEA and even some Fortran.  The FEA might be useful down the road, not so sure about the Fortran.

After graduation I worked as a research and development engineer at FlowServe Corporation where I developed algorithms for PID fluid flow control diagnostics. I prototyped the diagnostic algorithms for future implementation in FlowServe’s commercial products. Part of this work included testing and analyzing the performance of these algorithms with hardware in the loop.

While at Brigham Young University, I worked on numerous projects including research on autonomous unmanned air vehicles in the MAGICC lab, Finite Element Analysis problems, estimation of drag coefficients for cars and measuring force output for model rocket engines.  For more details on all of these projects and some fun videos of the UAVs, click here.